As soon as the world woke up for climate changes and all related to this troubles, people started looking for alternative energy sources. The high levels of carbon dioxide in the atmosphere and the “peak oil” have challenged engineers worldwide to invent new solutions. The high energy potential of wind and sun has been detected and used more and more. Unfortunately due to the fast changing climate environment, these are sources with unpredictable outcome.

Oceans make up 71% of the Earth’s surface and have been finally recognized as the best future energy source. The performance of tidal turbines, capturing the kinetic movement of ebb and flow tides and generating it into energy, is based on natural regularities that can be planned and controlled.

Tidal turbines are attached to the seabed in places with dynamic current movements. Each turbine consists of generator, rotor blades, hub and foundation. It looks like an underwater windmill attached to the seabed. Key structural principles and design criteria depend on the level of performance that need to be achieved, the seabed surface, installation and maintenance. The way how the ready turbine should be attached to the seabed plays an integral role, since strong currents can be an extremely aggressive environment. The foundation needs to keep the turbine stabile, so that it can operate safely and efficiently.

Until now the most common ways to adjust a tidal turbine to the seabed are piled structures and gravity-based structures. Rarely used are suction bucket anchors and moored floating structures, preferable for deeper water. There are also several hybrid projects as the gravity-pile and jacket-monopile hybrids and tripod structures. 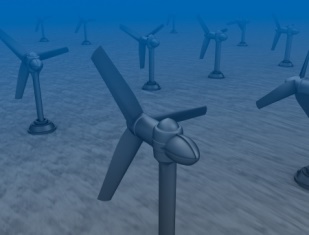 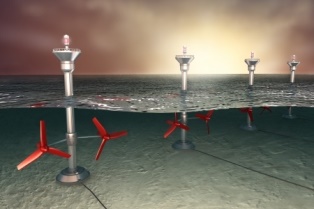 Drilled or hammered monopiles have been successfully used for wind off-shore turbines. Since these are well-known mechanisms with tracked performance, they were easily adopted by the tidal turbine industry. Although monopiles deliver strong support, they also feature several drawbacks. The lateral movements along the monopile due to the current and wave loads can result in defects that may grow into fatigue cracks and provoke brittle fracture. Another well-known problem is the grout, which fills the gap between the transition piece and the monopile. Fault in the grout has caused many times failure in existing turbines with monopile foundations.

Drilled piles require also a detailed depth profile and geophysical surveys. The complicated configuration needs experienced man power, machines and different tooling to pierce the seabed. Finally this penetration results in damaging irreversibly the surface. And the last but biggest concern for all marine engineers is the maintenance of the tidal turbines, once they have been installed. Up to today, all existing drilled or hammered foundations need planned, on-condition and corrective maintenance, since they consist of many components, which can get easily damaged by corrosion or strong currents. Removal, adjustment or exchange are expensive and time consuming operations.

Gravity-based structures are another widely used type of tidal turbine foundations. Due to additional ballast they maintain stability by means of their own gravity. Since these structures don’t penetrate the seabed the overturning moments needs to be carefully considered. If the gravity-based foundation is made of concrete, a massive supporting structure would be needed, leading to high material and logistic cost.  Although, this structure doesn’t require penetration, the footprint can irreversibly damage the seabed. 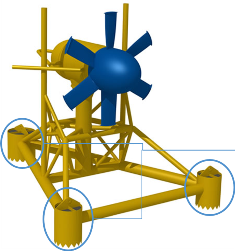 By seeking a better alternative, SABELLA has invented a new generation of tidal turbine that guarantees perfection through robust, but very simple construction. The key element of this new mechanism is the FMGC’s tidal turbine ballast. In general this is a gravity base, balanced by high resistant ballast made of gray cast iron.
Cast iron ballast is a better solution compared to concrete one since it is 4 to 5 times denser than concrete and achieve the target weight in less space and volume compared to concrete.

To eliminate the impact of a standard concrete gravity foundation, FMGC tidal turbine ballast has a tripod structure for better lateral stability, stiffness and eco-friendly installation. The simplicity of this design minimizes the risk of damage or failure fatigue. After the tidal turbines ballast has been attached to the foundation, a crane places the turbine on the required place. In depth geophysical surveys are not needed and even after the removal of the turbine there are any traces left on seabed surface.

Setforge is recognized for its "growth path" and is now a member of the Excellence network of BPI France.

The FMGC subsea cable protection system is specifically designed and manufactured to suit the requirements and overcome the challenges of each individual customer’s subsea application and seabed chara...