Gravity-based structures are a quite common type of tidal turbine foundations, widely used in tidal environment, but also in Offshore Wind or for the stabilisation of some components such as the connectors and junction boxes. The rapid development of the marine renewable energy sector favors the need for new gravity concepts. Besides design, ballast is a critical element of gravity-based structures. Its quality, density and weight, defined by the material choice and the conception of the ballast system are of crucial importance for the stabilisation and the success of the platform, resulting in better performance.

Gravity Base Ballast Made of Cast Iron

When these foundations are made of concrete, a massive supporting structure would be needed leading to high material and logistic costs. Furthermore, gravity-based foundations ballasted with concrete or sand ballast need bigger installation means and extended area on seabed.

On the contrary, cast iron is denser than concrete and results into a cost-efficient solution, far less prone to hydrodynamic loads. Cast iron with a density of 7.10 can achieve the target weight in far less space and volume compared to concrete. In general, it allows a volume reduction from 3 to 7 times compared to lower density ballast. The high density of the material favors a very limited seabed footprint compared to structures made of low density materials. Moreover, cast iron favours lifting and installation operations thanks to the compacity of the ballasting system.

Benefits of Cast Iron Gravity Base Ballast at a Glance:

FMGC has a proven track record of developping and supplying European key tidal projects with gravity base ballasts made of cast iron. Since this is a challenging and demanding sector, all involved solutions should be dynamic and easily adaptable to the various designs. FMGC cast iron ballast can be tailored to provide specific shapes and weights and can reach up to 16 tons per unit and compose assemblies up to hundreds of tons.

Gravity Base Ballast for HydroQuest Ocean 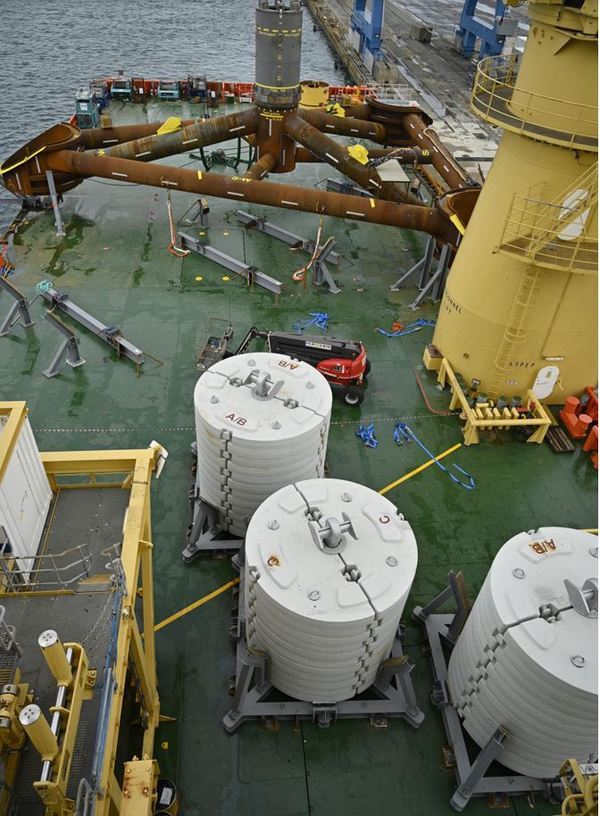 FMGC Ballast on the deck during the installation of the HydroQuest Ocean Turbine;

HydroQuest Ocean is a 1 MW tidal turbine developed by HydroQuest and CMN (Constructions Mécaniques de Normandie) that has been recently deployed in the waters near Paimpol-Bréhat in Brittany, France.

FMGC was assigned by CMN and Hydroquest with the design, development, manufacturing and delivery of the entire gravity base ballasting system, aiming at stabilizing the tidal turbine and preventing it from overturning and sliding. Thanks to the close collaboration with CMN and HydroQuest, FMGC has developed a solution contributing to an important reduction of the substructure costs and volumes.

The steel inserts ensure a most efficient assembly of the ballasting system. At the same time they ease as well the lifting and installation operations and thus limit the mobilisation time, both on dock and offshore.

Some critical validation steps, encompassing several mechanical tests have been achieved in order to finalize the creation lifecycle of the gravity base ballast development .

Prior to the manufacturing of the first inserts an FEA analysis has been performed in order to confirm their ability to meet the mechanical solicitations in operational conditions. The results have met all the expectations and the first pieces have been manufactured.

Once the steel inserts have been manufactured, FMGC has achieved another proof load tests with more than 450 tons of load applied during the process.

In early April FMGC has also achieved a first assembly of the complete structure prior to the deployment of the tidal turbine and associated substructure. In less than one day the entire ballasting system has been positioned and locked, meeting all the expectations. Finally different control procedures have been performed to validate the height and inclination, confirming once again the conformity of the system, and its ability to be deployed.

Finally on the 26th of April the gravity based and the FMGC ballasting system has been deployed by Ocean Installeer on Paimpol brehat site.

Gravity Base Ballast for Naval Energies

Naval Energies and Microsoft have created a prototype of a submerged data center, deployed in the EMEC site in the North of Scotland - an area with heavy currents and high waves. Due to the challenging environmental conditions, the stabilisation system had to be compact and easily deployable.

Thanks to previous successful collaborations, Naval Energies has once again trusted FMGC the development and supply of the cast iron ballast. FMGC has developed a tailored system suitable to the steel substructures and matching with the local lifting and handling means. The density of the cast iron has led to a more compact systems ensuring an easier installation and deployment. The pieces have been directly delivered to Scotland and the data center has been succesfully deployed.

As part of its previous activities in the tidal industry Naval Energy has already worked closely with FMGC in order to ensure the stabilisation and the ballasting of subsea connectors.

The company considered initially the concrete as the most appropriate ballast material. However its small density didn’t ensure the stability of the connectors in limited volumes, disqualifying the solution for technical and financial reasons.

Once the cast Iron was studied, the efficiency of this material was recognized and FMGC started developing tailored systems both for Paimpol Brehat and Fundy.

For the deployment of its P154 Tidal Turbine in the Etel Ria (Britanny) earlier this year Guinard Energies has also choosen the cast iron to ensure the stabilisation of the platform and the turbine itself. The ballasting solution, developed by FMGC, is directly connected to the substructure and will stabilize the turbine during operational conditions.

FMGC has been really proud of being a part of all these pioneer projects and to support the customers from the basic design until the deployment of the ballasting systems. The gravity base ballast confirms one more time the important role and efficiency of cast iron in offshore applications. The product is adjustable to a wide range of industries and can be tailored accordingly.