Clump weights are a highly efficient stabilisation component and thus one of the solutions when it comes to a mooring system improvement. They can be used for the stabilisation of floating offshore wind turbines, wave energy converters (WEC), floating tidal stream devices and offshore aquaculture installations.

Their position on the mooring system and their contribution to the mooring efficiency make them a critical component. The design but as well the material which the clump weights are made of are the key elements, ensuring the needed performance and the high quality.

It Is Not Easy to Design Universal Clump Weights

Clump weights can be applied on a wide range of offshore installation, subject to various environmental conditions. Therefore their design should successfully cover the requirements of various mooring systems. 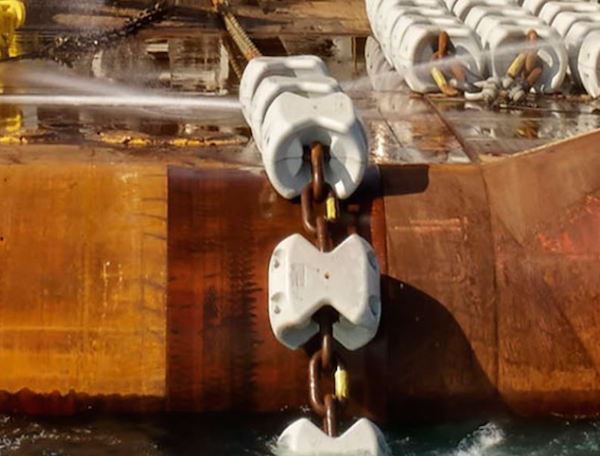 Thanks to its longstanding expertise in ballast solutions coupled with a good understanding of the mooring requirements in offshore environment, FMGC has designed clump weights, able to restrict the movements of the floating structure by contributing to the restoring forces, without resorting to expensive solutions or longer mooring lines length. Thus they offset a part of the vertical forces against the anchor in catenary or semi-taut design.

The “distributed” configuration represents a set of medium-sized clump weights, distributed over a segment of the mooring line. This configuration optimizes the effectiveness and the cost of the solution thanks to the proportional recovery of the loads and the most accurate dimensioning.

On the contrary, the “mutualized” solution consists of one clump weight, attached to one specific point of the anchor line. This configuration neutralizes some of the impact of wind and wave and thus limits the tensions on the anchoring line.

FMGC is able to dimension and customize these clump weights and the associated validation steps according to the specific project requirements on both distributed and mutualized configurations.

In order to ensure optimal efficiency and reliability of the mooring system, its various components need to be designed in accordance with the specifications of the project and the site.

As a critical mooring component, the clump weights require as well a proper dimensioning, considering the design life and the loads to withstand, but also the interactions with other mooring components.

Thanks to its manufacturing process, based on the molding technique, cast iron is very valuable material when it comes to tailored designs. Indeed, it allows a wide range of shapes and to implement specific elements such as pad eyes, inserts. connection systems, etc.

In order to provide the most accurate solution - a clump weight, meeting all requirements, the FMGC dedicated teams are working closely with the customer from the basic design to the mass production. Moreover, FMGC is able to achieve the numerical analysis and tests on prototypes ensuring the reliability of the clump weights, taking in consideration the possible interactions with other mooring components.

The clump weights are made of cast iron with a lamellar microstructure EN-GJL-200 with the high density of 7,1 (in air), sourced by high-quality European recycled raw material of premium quality.

Cast iron is a material featuring an optimal balance between mechanical properties and cost efficiency. FMGC has recognized the huge potential that this balance offers to the offshore sector.

FMGC has assigned InVivo Environment to make a research on the behaviour of cast iron in marine environment. The findings have confirmed:

Cast iron features a high density and an interesting ability to withstand loads and mechanical solicitation while the cost of the material stays lower than other materials such as steel.

In the case of mutualized configuration ballast solution made of cast iron achieves the targeted weight in less space and volume compared to concrete. Concrete’s density can be improved through additional aggregates, which increases the cost, but it doesn’t make the concrete denser than the metal.

Distributed clump weight are most of time positioned on the touch down point of the mooring lines. This induce repeated impact on the seabed, which requires a material with sufficient mechanical properties to handle these loads.

FMGC Cast Iron clump weights are able to resist to impacts on the seabed during 25 years in a floating wind environment (Validated with numerical studies and drop tests). Other materials, such as steel for example are able to withstand these loads as well, but their cost is higher. Moreover, on catenary mooring systems the use of clump weight will limit the length of mooring lines and result in significant cost savings.

FMGC ballast doesn’t require any expensive coating to handle abrasion and corrosion. The solutions, adopted today by FMGC include an oversizing dimensionning in accordance with the corrosion hypothesis, which guarantees a competitive price for ballasting until the end of the exploitation period.

A Special Word to Density

The concept of density has the following impact on clump weights:

In the distributed configuration the high density of the cast iron allows to provide the weight needed to ensure the restoring forces in a really compact volume, allowing to avoid the additional hydrodynamics loads, but also to ease the implementation on the mooring system. This eases the installation, but also limits the footprint of the clump weights once deployed.

In the mutualized configuration the density ensures a more compact solution which is less subject to hydrodynamic loads, allowing both a reduction of the needed weight but also a better stability of the hanging clump weights.

Density of cast iron compared to reinforced concrete and sand:

As one of the European leaders in design, development and manufacture of ballast solutions, FMGC highly recommends the use of cast iron. This is one of the best options in terms of materials for offshore clump weights providing a good balance between cost reduction, density, strength and corrosion resistance.

Setforge is a member of the COQ VERT community!

Setforge is honoured to join the COQ VERT Bpi France community and the first Decarbonation Accelerator in partnership with ADEME.

Setforge L'Horme welcomes the ADEME (French Environment and Energy Management Agency) to present our activities and the purpose of their subvention.

New step for the EPITHER project

The Setforge Lab integrates two new machines for the increase in speed of its EPITHER process.